The Global Game Jam is nearly over in many parts of the world, but it will surely not be forgotten.  If you’re wondering what it is, then check out their website.  The basic rules of GGJ are to make a game in 48 hours.  The game will be judged and the creators of the best game will get it published.  Most people enter for the sake of hilarity; there are honorable mentions and recognition for games with hilarious titles and the like.

My friend Señor Arturo participated in the NYU group, while my friend Dave was in the FullSail group.  Sadly, Señor Arturo didn’t have up a puppycam, but Dave’s group did.

You don’t know about PUPPYCAM?! HOW DARE YOU!

In other news, there are new pieces of art up in the New York subway cars.  They’re pretty trippy as usual. Andrea Dezsö, a multitalented fine artist, created the following illustration:

It’s called “Under The Garden” and it was commissioned last year by the MTA.

Besides illustration, Dezsö also sculpts, writes, sketches, embroiders, animates, and teaches various subject.  What a great example of a Jack of All Trades!  ^0^

The other interesting new illustration was by Béatrice Coron, a paper-cutting specialist.  Her art is amazing and very intricate.  Sadly, I could only find a tiny version of her poster.  However, I also found more works on her website. 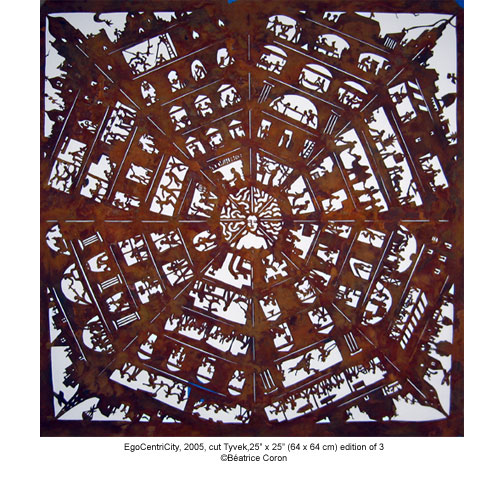 People are still incredibly multitalented, even in such a modern age when people believe everything can be done on a computer.  It’s inspiring, I think.

Anyway, I’m gonna go check out some of the games submitted.