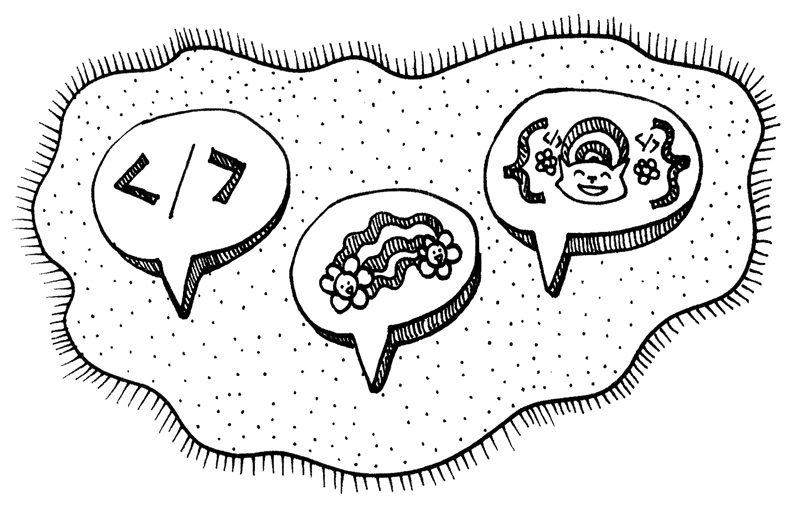 Technology has changed our lives for the better. More people than ever seem to believe in the potential of code. How can we fit creativity and artistry into the world of programming?

People are flooding the tech world to find high-paying, high quality jobs. Groups such as Black Girls Code, Girl Develop it, Women Who Code, and tons more encourage marginalized people to grab programming jobs by the horns and pull in great salaries, free food, gym memberships, standing desks, and whatever else they need to keep pushing code.

The good thing about this is that technology is slowly getting more diverse. People from all backgrounds tune in to watch tech product announcements and line up at stores for new technology. More marginalized people are utilizing technology to solve common problems in their communities and providing much-needed diversity of thought at high-powered companies that reach millions of users per day.

The bad thing is that many still think programming is not creative. I have heard programmers say they’re not the “creative type” despite solving problems using code every day. I have also met artists who use code to express their ideas yet do not identify as programmers. So let’s examine two important factors when it comes to how we think about programming: education and culture.

Programming education can be hostile. Many say tech is a meritocracy, but people often don’t have equal access to resources. Young people in many communities don’t have access to computers until they reach adolescence. Women are encouraged to learn to code but often don’t receive enough support or mentorship. Those who choose to enter college and attain a computer science degree may find that their programming classes are structured as lectures. Some professors also assume students have time to work on projects outside of class, but people like me had to work in order to pay for school. I often lagged behind when professors didn’t allow students to practice during class.

People who dislike common teaching methods or can’t afford classes resort to tutorials. Sadly, a lot of tutorials assume readers have a certain level of understanding and use heavy amounts of jargon. Some people resort to learning by hacking apart more experienced programmers’ projects and googling until things start to make sense. However, like me, many of those people never seem to feel like real programmers.

Programming education still has a high barrier to entry. Many people are disadvantaged and have to work harder to understand programming. It is not a meritocracy.

Secondly, let’s look at programming culture. I believe programming is inherently creative. Finding solutions to problems is a skill that requires much creative thinking. However, instead of focusing on the solutions, many people focus on the tool.

Due to a continuous barrage of arguments about languages, frameworks, semantics, models, and efficiency, you might not believe you are a real programmer unless you code and contribute to open-source software in all of your spare time. Companies often encourage this mentality because they think increasing competition and encouraging this lifestyle improves productivity.

Programming culture is not sustainable. What about those who have families or unrelated hobbies and do not value code over the quality of their lives? If we change the our mindset in regard to programming, can we be happier and more fulfilled?

I love coding because I love creating. I started coding around the age of 11 because I was fascinated with making digital interactive experiences. I didn’t know the work I was doing could be translated into a job, nor did I care about the fact that I was typing hundreds of lines of code each week.

As an adolescent, I spent my spare time after school drawing fanart, visiting anime websites, and playing video games. One day I stumbled upon a website called Otaku World that hosted user-generated KISS dolls, interactive virtual dress-up dolls. Some of the dolls were characters from my favorite anime. Being interested in fashion, I yearned to make my own dolls.

KISS dolls are why I learned to code. The dolls were made using a proprietary scripting language compressed into LZH files. Being able to type something, reload, and see changes appear onscreen was a magical feeling. I spent hundreds of hours coding and creating art for KISS dolls, but the code never mattered because I was creatively expressing myself.

Eventually I looked into making my own website because a lot of people in the KISS doll community had large internet presences. Before making dolls, I once used AOL Home to make a Sailor Moon fansite. I had yet to create a public-facing site using HTML and CSS. The resulting website I created would be considered a complete disaster by professional developers, but it worked and I was satisfied.

The natural progression continued and by the time I entered college, I had learned enough to take on freelance web design and development jobs. I eventually taught myself JavaScript in order to make more dynamic websites. Each time I learned a new programming language or framework, I made something that could be shared with people.

Programming is amazing because it turns ideas into reality. However, many end users don’t care about what’s behind the interface as long as it functions well. Instead of solely focusing on your less-than-ideal semantics, hacky code, and inefficient models, spend some time to celebrate the fact that you created something brilliant.

If you are a developer who lacks what many consider traditional artistic skills, you can still be incredibly creative. For example, why not try flexing your storytelling muscles by making a text-based game? If you work on digital experiences all day, why not try physical computing? There are many opportunities for you to be creative even without being a master of color theory.

Painters love their paintbrushes but instead choose to share the murals they paint. Plumbers do not brag about the pipes they use. The same applies to you. You use code to build life-changing things, no matter how small or insignificant they seem. You are a real programmer, and you are creative.

Go out there, make cool stuff, and celebrate your creativity.

Book me for your next event